HONG KONG – Hong Kong has partially opened up one of the territory’s last no-go zones, Sha Tau Kok, a village banned 71 years ago to prevent the influx of illegal immigrants from mainland China.

The village in the northeast corner of Hong Kong is part of an ambitious development plan to create a new metropolis along the border with Shenzhen, aimed at boosting the local economy and improving interaction with the mainland.

The opening of Sha Tau Kok comes 44 years after Xi Zhongxun, the late father of President Xi Jinping, played a leading role in creating economic opportunity in Shatoujiao, the Mandarin name for the village mainland. Top leader Xi saw desperate economic disparities with Hong Kong as China emerged from the shadow of the Cultural Revolution.

“Today is a great day for Sha Tau Kok to officially open the pier to group tourists,” Hong Kong Chief Executive Carrie Lam said at the opening ceremony on June 3. For the next six months, pre-registered Hong Kong tour groups are allowed to visit parts of the village and board boats to nearby islets through the restricted waters of Starling Inlet.

As Lam pointed out in his brief speech, the limited opening is an integral part of his northern metropolis development strategy, which was revealed last November. The new metropolis would span almost 300 km2 along the city’s border with Shenzhen, where nearly a million apartments are to be built, housing up to 2.5 million people.

Part of the planned metropolis overlaps with the Closed Border Zone, a border buffer zone that includes Sha Tau Kok, controlled by police that was established in 1951 to combat illegal immigration, smuggling and other criminal activities cross-border. While the total area was reduced in 2016 to less than 4 km2 from 28 km2, the framework remained after the transfer of sovereignty from the United Kingdom in 1997. Unauthorized entry by non-local residents may result in a fine of 5,000 Hong Kong dollars ($637) and two years’ imprisonment.

The border area, seen from the mainland, was a clear recognition of the mainland’s backwardness for Xi Zhongxun, who had just been rehabilitated after 16 years of political persecution to assume a leadership role in Guangdong province in April 1978.

“It’s been a long time since the liberation, nearly 30 years,” senior Xi told local cadres when he visited Shatoujiao in July 1978, watching the glittering scene from the Hong Kong side. He was looking at Zhongying Street, a 250-meter-long road dividing the village between Hong Kong and the mainland. “This side is thriving, but our side is tattered and worn out,” Xi said, according to official Chinese publications.

The road is called Chung Ying Street on the Hong Kong side, but both names have the same Chinese characters meaning Sino-British Street. Its history dates back to 1898, when an arbitrary line was drawn through the village as the United Kingdom forcibly multiplied the domain of Hong Kong sevenfold through a 99-year lease on the New Territories. 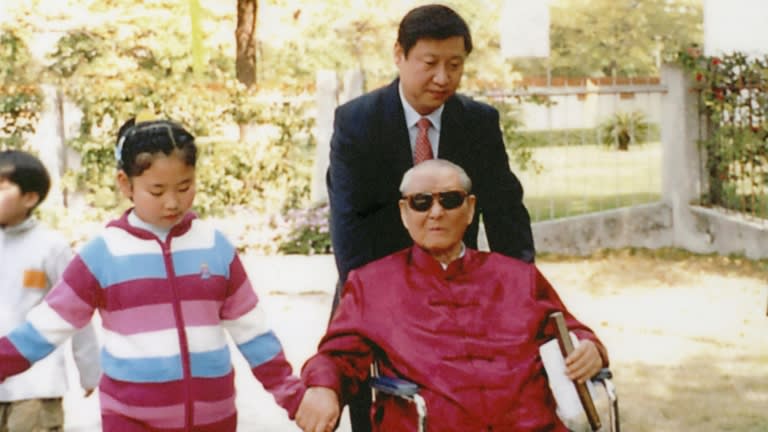 Elder Xi took office in Guangdong during a historic spike in mainland residents illegally crossing into Hong Kong. Economic disparity had widened dramatically as China suffered from a series of political struggles after the communists came to power in 1949. In 1978, the gross domestic product of all of Guangdong was barely more than half of that of Hong Kong.

According to Fang Bao, then Communist Party leader of Bao’an – now Shenzhen – President Xi allowed small-scale border trade to resume after it was banned for being too “capitalist” during the Cultural Revolution .

In the 2014 interview with state-backed media, Fang said the elder Xi also allowed various other business activities with Hong Kong, such as importing second-hand goods, exporting sand and gravel and opening small businesses with Hong Kong investors. Local residents wanted to but were blocked by central government licensing authorities who failed to understand the reality and desperate need on the ground.

“In order to boost the economy, the power of [business] approval should be delegated to the county level,” Xi Zhongxun told local executives. Province. Residents of the Shenzhen side of Shatoujiao, the Mandarin pronunciation of Sha Tau Kok, beckoning to the Hong Kong side of the same village but separated by sea and barbed wire. (Photo by Kenji Kawase)

Zhang Zhigong – longtime secretary to the elder Xi, serving before his political downfall and after his rebirth – recalls his boss pointing out that the root cause of the severe exodus to Hong Kong was poverty caused by misguided policy. Zhang said in a 2013 interview that Xi said, “The fundamental solution to prevent people from secretly leaving the country is to expand production here and raise our people’s living standards as soon as possible.”

Xi Zhongxun’s first-hand visits to the border area and dozens of other places in the province culminated in him making a formal proposal to the party’s Central Committee in April 1979, urging the transfer of authority to the Guangdong to speed up reform and opening up. In making his point at the party meeting in Beijing, Xi even made an analogy implying that Guangdong was an “independent country”, according to Zhang.

Fast forward four decades, and Shatoujiao on the mainland side seems to be more flourishing than Sha Tau Kok on the Hong Kong side. In terms of GDP, Shenzhen overtook Hong Kong in 2018, and the gap has widened since.

The emergence of Shenzhen was not the work of Xi’s father alone, of course, but he was one of the key leaders who helped lay the foundations.

Hong Kong no longer sees Shenzhen as an underdeveloped neighbor but rather as an equal partner.