WARSHIP SPEECH:
The US vice president said US forces would operate in the region undeterred, even as Washington expects continued aggression from Beijing.

US Vice President Kamala Harris, on the deck of a US warship in Japan, said yesterday that US President Joe Biden’s administration intended to deepen unofficial ties with Taiwan.

“Taiwan is a vibrant democracy contributing to the global good – from technology to healthcare, and beyond, and the United States will continue to deepen our unofficial ties,” Harris said aboard the USS. Howardan Arleigh Burke-class destroyer, showed excerpts of his speech released in advance by the White House.

She said Beijing “defied the freedom of the seas” and “deployed its military and economic might to coerce and intimidate its neighbours.”

Many have witnessed “disturbing behavior in the East China Sea and the South China Sea, and more recently, provocations across the Taiwan Strait”, she said.

“The United States believes that peace and stability in the Taiwan Strait is an essential feature of a free and open Indo-Pacific,” Harris said.

Harris is on a four-day trip to Japan and South Korea in an effort to demonstrate American commitment to allies in the region. 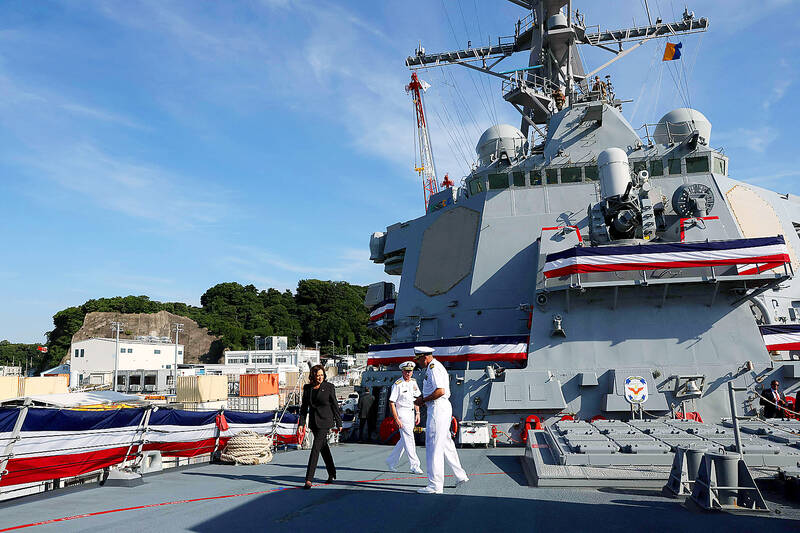 The trip sets the stage for Biden’s visit to the region later this year, when he is expected to meet Chinese President Xi Jinping (習近平) and speak with allies about efforts to denuclearize the Korean peninsula and address tensions growing in Taiwan.

Harris’ remarks to the white-clad U.S. sailors came after Biden pledged in a September 18 interview to defend Taiwan against a hypothetical “unprecedented attack.”

Harris said US forces would operate in the region “undeterred and without fear”, even as Washington expects “continued aggressive” actions from China.

In Beijing, Chinese Foreign Ministry spokesman Wang Wenbin (汪文斌) told a press briefing that Washington must return to the “one China” policy and “make it clear that it opposes all Taiwanese separatist activities”.

Before Harris spoke to the American servicemen aboard the Howardshe descended below decks and was given a demonstration of the warship’s missile and anti-submarine capabilities.

A commander pointed to a digital map showing a hypothetical enemy, a “hostile country” he declined to identify.

Comments will be moderated. Keep comments relevant to the article. Remarks containing abusive and obscene language, personal attacks of any kind or promotion will be removed and the user banned. The final decision will be at the discretion of the Taipei Times.